Kenyon Henry is the author of the young adult fantasy series, "Chronicles of Stephen, " and the paranormal mystery novel, "Ghost of Bleu Mountain."  He presently publishes his works through JumpMaster Press™, where the series will continue. He is an Imadjinn award winner. Kenyon also created Next Chapter Convention & Xpo, and he co-created GOAT Reads with fellow author, Keith Robinson. Kenyon is a native of Northwest Georgia, where he lives with his wife, Shaunna.

Dan lives with his wife Tracy and some largely inert felines in northwest Georgia. Readers can learn more about him on his website, www.danjolley.com. 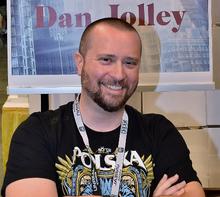 Jerry Harwood was born in Ooltewah, TN. His mother was an elementary school teacher and he spent his afternoons reading books in her classroom or the nearby library. He currently is a writer, which makes sense based on the fact you are reading this here. He has experimented with other occupations: camp director, program director at a counseling center, college professor and middle school teacher. Jerry has backpacked Europe, taught in a Ukrainian University, worked in Rwanda after the genocide, is a first responder, sort-of remodeled a VW Thing, and has a love for Cherry Coke Zero that is only surpassed by his love for his wife, six children, and grandson. He is a member of the SCBWI, the Atlanta Writer's Club and the Chattanooga Writer's Guild where he also serves as a board member.

David A. Simpson is an International Best-Selling Author of the Zombie Road and Feral Children series. He has sold hundreds of thousands of copies and has been translated into three languages. His books have won numerous awards and have spent weeks in the number one slot for apocalyptic fiction on the Amazon charts.

His Zombie Road series has been optioned and is currently in development for television.

He lives in the north Georgia mountains forty-five minutes from the nearest blacktop road unless his wife is driving. Then it’s more like 20. They have a very spoiled pug, a very weird cat and a bear that they can’t seem to get rid of that thinks everything they plant in the garden is for him.Type your paragraph here.

Jim Butcher is the author of the Dresden Files, the Codex Alera, and a new steampunk series, the Cinder Spires. His resume includes a laundry list of skills which were useful a couple of centuries ago, and he plays guitar quite badly. An avid gamer, he plays tabletop games in varying systems, a variety of video games on PC and console, and LARPs whenever he can make time for it. Jim currently resides mostly inside his own head, but his head can generally be found in the mountains outside Denver, Colorado.

Jim goes by the moniker Longshot in a number of online locales. He came by this name in the early 1990’s when he decided he would become a published author. Usually only 3 in 1000 who make such an attempt actually manage to become published; of those, only 1 in 10 make enough money to call it a living. The sale of a second series was the breakthrough that let him beat the long odds against attaining a career as a novelist.

All the same, he refuses to change his nickname.

Guest subject to change!   So check back often!

Keith Robinson writes magical fantasy fiction for children and middle-grade readers, although his books are suitable for all ages.
The ISLAND OF FOG series features a young group of shapeshifters in a world of dragons, centaurs, mermaids, and other creatures from myth and legend, while the SLEEP WRITER books are pure sci-fi adventure fun with wormholes and portals, aliens and UFOs, robots and gadgets, weird and exotic monsters from space, and oh yes, a spot of time travel as well.

Also the author of QUINCY'S CURSE, and co-author of FRACTURED with Brian Clopper.

Steve is the author of the sword and sorcery novel, Skallagrim – In The Vales Of Pagarna (Book One) and the fantasy epic The Lay Of Lirazel. He’s also the co-founder, bassist, lyricist, and producer of the critically acclaimed progressive rock group Glass Hammer.

Except for a few years spent traveling with different rock groups, Steve has been a lifelong resident of Chattanooga and is the owner of the area’s longest-running recording studio, Sound Resources.

Through his group, Glass Hammer, he’s released over twenty studio albums, several live albums, and three concert DVDs. His lyrics are often inspired by the works of C. S. Lewis, J. R. R. Tolkien, and H. P. Lovecraft. He won The Tolkien Society’s Imperishable Flame Award in 2005 for Tolkien Inspired Creativity for his work on the album, The Inconsolable Secret, The Middle-Earth Album, and his book of epic-fantasy poetry.